A series of Cash Outs were made as they sold 90% of their ticket during the pool, but their ticket went on to win and, crucially, they left 10% untouched which was worth £50,018 to the customer at the end of the pool – more than 13 times the total value of their Cash Outs! 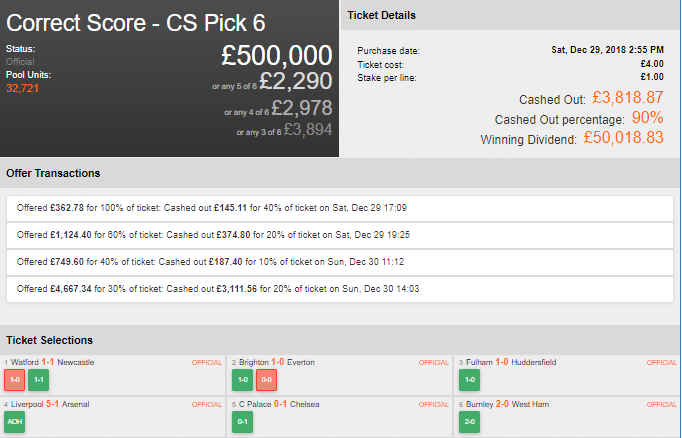 Legs 1, 2 and 3 all ran concurrently and, to some degree, were friendly scorelines for punters. Abdoulaye Doucore’s 82nd minute equaliser for Watford will have caught this punter’s attention as they now needed a Fulham goal to stay alive in the pool.

Step up Aleksandar Mitrovic, whose stoppage time winner sent Craven Cottage into a frenzy and our friend here into the next leg. The customer decided to Cash Out 40% of their ticket for £145; cementing £141 profit with 3 legs left to play and just single selections in each of those legs. Probably a wise decision… right?

Leg 4 was a treat in the form or Liverpool vs Arsenal. This is a fixture usually ridden with goals. Prior to this edition, 8 of the last 12 had served up enough goals to merit an ‘Other’ scoreline.

What is an ‘Other’ scoreline? ‘Other’ Corret Score selections group together unlikely scorelines (those scores with plenty of goals) that act as a customer friendly feature in Correct Score betting. Learn more

Our customer had gone for ‘Other home win’ in Liverpool vs Arsenal (they needed Liverpool to score 4 or more goals and win the game). Arsenal became the first team in 2018 to take the lead at Anfield in the Premier League courtesy of Ainsley Maitland Niles. But 2 goals in minute from Firmino, a Mane goal and a Salah penalty on the stroke of half time meant Liverpool headed into the break already 4-1 up. Another penalty in the second half – this time converted by Firmino who claimed his hat-trick – embedded further misery on the Gunners as Liverpool ran out 5-1 winners.

After sleeping on it, they took another 10% on Sunday morning (£187) before Crystal Palace took on Chelsea in leg 5.

The Blues ran out 1-0 winners at Selhurst Park thanks to N’golo Kante’s second half strike. They were through to the final leg!

A brilliant end to the year for this customer and a huge well done to them from all of us here at Colossus.