An incredible story unfolded on Thursday as a €1 ticket in the £49,441 Rollover Win 6 pool at Chester swiftly became worth €21,879.62 for one ecstatic player.

The ticket got off to an outrageous start in the 13:50, where the player had pinned their hopes on a 22/1 shot in Merhoob. He looked to be travelling well but was boxed in for large parts of the race, eventually finding daylight around the turn when he sauntered into the lead, beating the favourite, Copper Knight, into second place.

The surprise winner wreaked havoc in the Win 6 pool, eliminating 98% of the 15,165 tickets that had originally entered and leaving just 277 standing.

In the next two races, the player had backed the favourites, Circus Maximus and Lincoln Park. Both ultimately proved to be relatively comfortably in victory, although it has to be said that Lincoln Park, in particular, was drastically slowing towards the end and may have been beaten if the finishing line had been much further.

In the fourth leg the player made a brave choice again, opting to swerve the odds on favourite, Kew Gardens, and back the second favourite, Morando. It once again proved to be an extremely shrewd pick and Morando had no problems streaking ahead of the field, showing them his class. He would go on to win by several lengths. Morando’s victory reduced the pool to just 3.01 units and, with two legs remaining, finding a winner would be nip and tuck.

The player selected Full Authority in the final race, who was the narrow favourite in a very short, five furlong race. 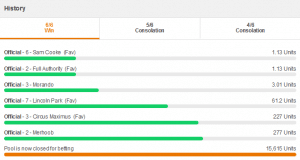 However, the result was never in doubt. The 2yo colt led from the off and never relinquished control, streaking clear of the field in the final furlong.

With a perfect five wins from five, the player had a big decision to make before the final race, as they were made a Cash Out offer of €5,373.03 for their ticket. Would they Cash Out fully or even partially, in order to guarantee a return? The answer was that they would do neither. With a 22/1 winner already in the bag, the player’s confidence was clearly booming and, as such, they opted to put all their faith in Sam Cooke, who was favourite in the last.

He was held up in the early stages of the race and, for a while, the player must have been concerned that an opening might not come. However, with two furlongs remaining, he finally found a gap and moved to the outside before accelerating into the lead with a furlong remaining. After rocketing around the final bend he was clear, streaking away to win the race and secure our player a magnificent €21,879.62 return on their €1 stake. Many congratulations!

Three of our greatest ever Cash Out stories
Stunning Pick 4 ticket lands £15,366 return from £12 stake