Thyestes Day was made even more special than usual this year as Presenting Percy returned to action after a 10 month break and powered to victory in the Galmoy Hurdle – a crucial result for the Syndicate who had picked out the favourite as 1 of 2 selections in leg 3 of the pool.

Relive the victory below…

MLT launched the £288 ticket shortly after we announced the Boosted prize (to £50,000 from its initial £40,000 guarantee) on Thursday morning. It took just 1 hour to fill, with 16 other players contributing to the Syndicate ticket that was shooting for a possible £25,000 (staking at £1 / line).

The Captain covered 9 horses from 20 runners in leg 1 and it was a good result for the Syndicate as Spare Brakes (8/1) overcame the 9/2 favourite, Breesy Mountain, among others. Of 3,935 units that entered the pool, 427 had made it through to leg 2.

Leg 2 was one of two banker selections from MLT (races with only one selection covered) as he chose ‘Unnamed Favourite’. That favourite ended up being The Big Dog (Evens) who, despite a slight mistake at the last, beat off competition from Voix Des Tiep to win by 6 lengths. Onwards and upwards for the Syndicate.

Next up, the Galmoy Hurdle and it was time for Presenting Percy to remind the world what an impressive specimen he is. It wouldn’t turn out to be easy as Bapaume and Killultagh Vic pushed Presenting Percy all the way but the Gold Cup favourite was strong enough to win the race for the second consecutive year.

234 units were through to leg 4 of the Win 6 and MLT’s Syndicate had four selections to cheer on. Interestingly, they did not have the favourite (11/2 Veneziano Springs) covered! An 8/1 shot – Allez Kal – ran home victorious to put the them through to leg 5.

They were now looking at a Cash Out offer of over £1,000 which the Captain chose (wisely) to pass on.

Leg 5, the Thyestes Handicap Chase with 18 runners, saw Invitation Only (4/1 fave) go head-to-head with Alpha Des Obeaux down the final stretch and Ruby Walsh was just able to ride Invitation Only to victory to the joy of the Syndicate – who had not covered the 2nd placed horse!

They were through to the final leg! But, with only one selection in the last (Unnamed Favourite), would the Captain now consider a Cash Out? Apparently not! He showed nerves of steel and they were all in for the final leg.

That favourite, 11/8 Cilaos Emery, was making its debut over fences for Willie Mullins. The Syndicate may have been biting their nails during the race but Ruby Walsh was able to do the business, winning by 4 lengths, to secure a victory for MLT and Co.

Many congratulations to all those involved! 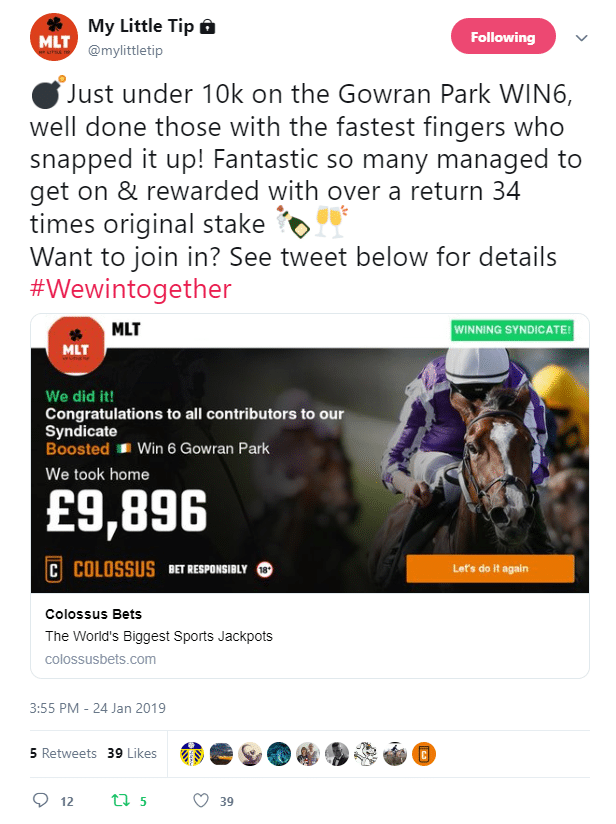 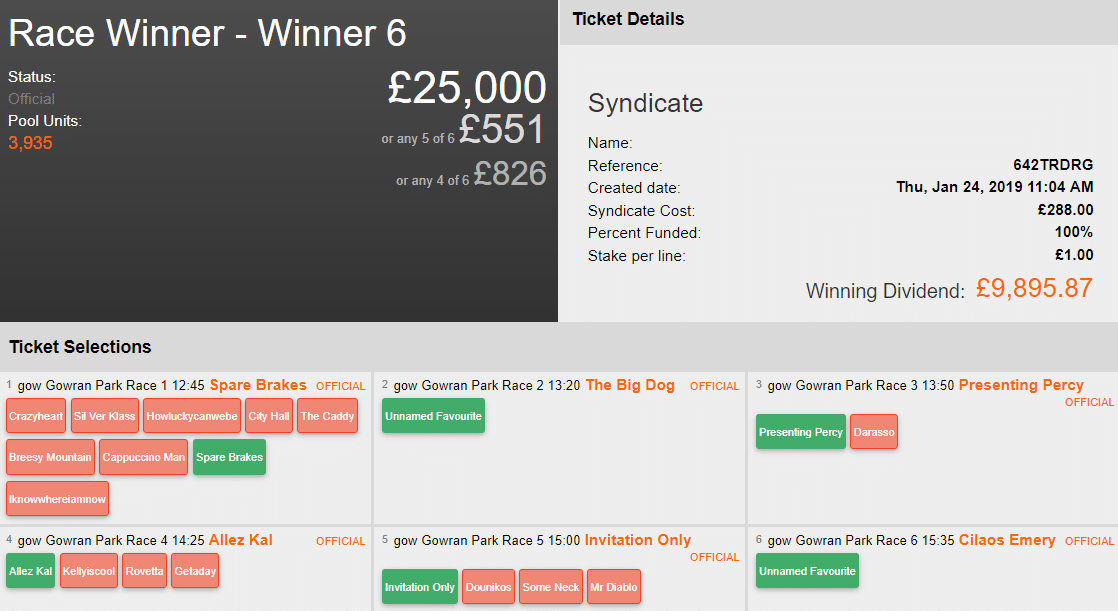