MICHAEL OWEN’S GUIDE TO THE £1,000,000 MILLIONAIRE FREEPLAY6. The FA Cup takes centre stage this week, and it will be interesting to see what the Premier League sides do in terms of team selection.

Do they risk it and field weakened sides and rest players – and you suspect that the four teams involved in the League Cup semi-finals in midweek will be tempted to – or do they play their best available XIs and look to secure morale-boosting victories?

Having been fortunate enough to win the FA Cup, I have always been in the latter camp myself, believing that a good run in the competition is a massive positive for the players. And, more importantly, the fans.

So what will Bournemouth do for their visit to Birmingham?

I would hope that they will pick their strongest side and build on their much-improved form in the league that has seen their only loss in the last eight games coming in a 2-0 defeat at leaders Arsenal. And they did well to get a point at Leicester on Saturday, considering they had a man sent off.

It will not be easy against Birmingham, whoever they select, though. They may have lost five of their 13 home games, but they have been playing well recently, winning their last three matches in front of their own fans.

I will go 1-1 in my Free-To-Play Millionaire Pick 6 perm.

All is not well at Southampton it seems, and Ronald Koeman did not look a happy man after his side’s 1-0 defeat at Norwich last weekend. That was their fourth defeat in their last five matches, and they are in danger of being dragged into a relegation fight.

That may sound a bizarre thing to say about a team that beat Arsenal 4-0 on Boxing Day but it is clear that the Saints are vulnerable at the moment.

Opponents Crystal Palace have a lot of injury problems though, and they were put in their place 3-0 by Chelsea on Sunday. But, against that, they are seventh in the League and have an impressive away record. I go 1-1 again. 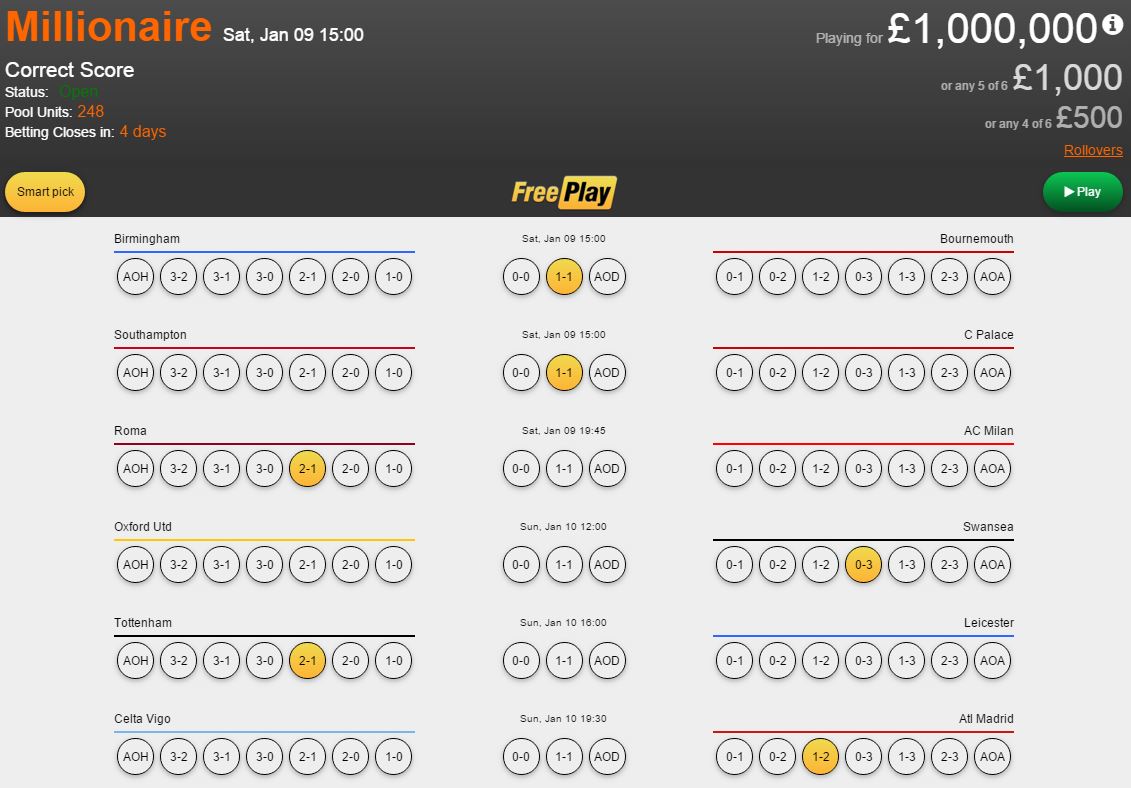 Roma were in action at Chievo on Wednesday night – they drew 3-3 away – but it is their impressive home form that has seen them gravitating towards the top of the table.

They have won six, and only lost one, of their eight home matches – the only loss coming in a surprise defeat to Atalanta – and I take them to beat AC Milan 2-1.

There is not a lot between the two sides in the league but Milan have struggled on the road, winning only three of their nine games. And they suffered a shock 1-0 home loss to Bologna on Wednesday night, too.

Swansea have improved in recent games, and didn’t play badly in a 2-1 loss at Man Utd on Saturday. But they are firmly in a relegation fight, that’s for sure.

Opponents Oxford are playing well and scoring goals, have an impressive home record and are third in League Two. Plenty of people will sense a shock here.

However, this is exactly the opportunity Swansea should take to try and gain some confidence by playing their best side. I hope they do anyway as I am taking them to win 3-0.

Tottenham were again outstanding for much of the game in a 1-1 draw at Everton on Sunday, and I think they will beat Leicester 2-1.

Once again, keep an eye on team selection, as both of these managers may look to give their top players a rest.

But, at this stage, I have to fancy Tottenham to take care of a Leicester side without a goal in their last three matches, a situation not improved by the fact that Vardy is likely to be out for a couple of weeks due to minor groin surgery.

However, this is an excellent match-up between two of the most consistent sides in the league, with only two losses apiece.

Atletico Madrid have only lost three of their 18 games in La Liga and sit top of the table, and they may be able to sneak past Celta Vigo 2-1 here.

Celta Vigo were in action in the Copa Del Rey on Thursday night – Atletico played on Wednesday, and drew 1-1 away – and that is clearly not an ideal preparation. And for a top-five side, they don’t have a great home record.

Five EPL transfers that need to happen in this transfer window
When will the EPL provide a Ballon d’or winner?