I’m not sure that I’d be in a mad rush to back Arsenal at odds-on to win the Premier League but you can’t deny that they were good value for the three points against Man City on Monday night, and are now in pole position to win their first title since 2004.

And considering they have done so with a pretty horrendous injury list, it is all the more impressive.

Impressive is not a word you would use to describe Aston Villa this season, and they have had to make do with four draws in 16 games since their opening day win at Bournemouth.

To be fair, three of those draws have been in their last six matches, and they are at least showing some fight under new manager Remi Garde.

But they have only netted five times in eight winless matches at home, and you just can’t fancy them at the moment, even against a West Ham side similarly struggling for form and goals.

So I am going for 1-1 in the first leg of the Boxing Day Free-To-Play Millionaire Pick 6.

I have often been accused of letting my heart rule my head when it comes to Liverpool in the past and I am sure those accusations will be forthcoming once again when they read that I fancy the Reds to beat Leicester 2-1!

Yes, I am fully aware that Leicester continue to confound the critics and backing against them this season has been akin to throwing your money on the fire. Especially away from home, where they have won six, and drawn three, of their nine games.

And Liverpool have failed to score in three of their last four matches, most recently when humbled 3-0 at Watford last weekend.

But Klopp will surely get a reaction from his players after that Vicarage Road no-show, and I can’t get out of my head just how impressive they have been on occasions this season when their pressing style comes off.

Anyway, I’ll give them once last chance at home, especially as Leicester do give you chances.

Everton are another side who have cost me dear this season, most recently when beaten 3-2 at home by Leicester, funnily enough. They have disappointed against the better teams.

But they do have a good record against sides in the lower half of the league, and I think they can bring an end to Newcastle’s mini-revival by a 2-1 score line. 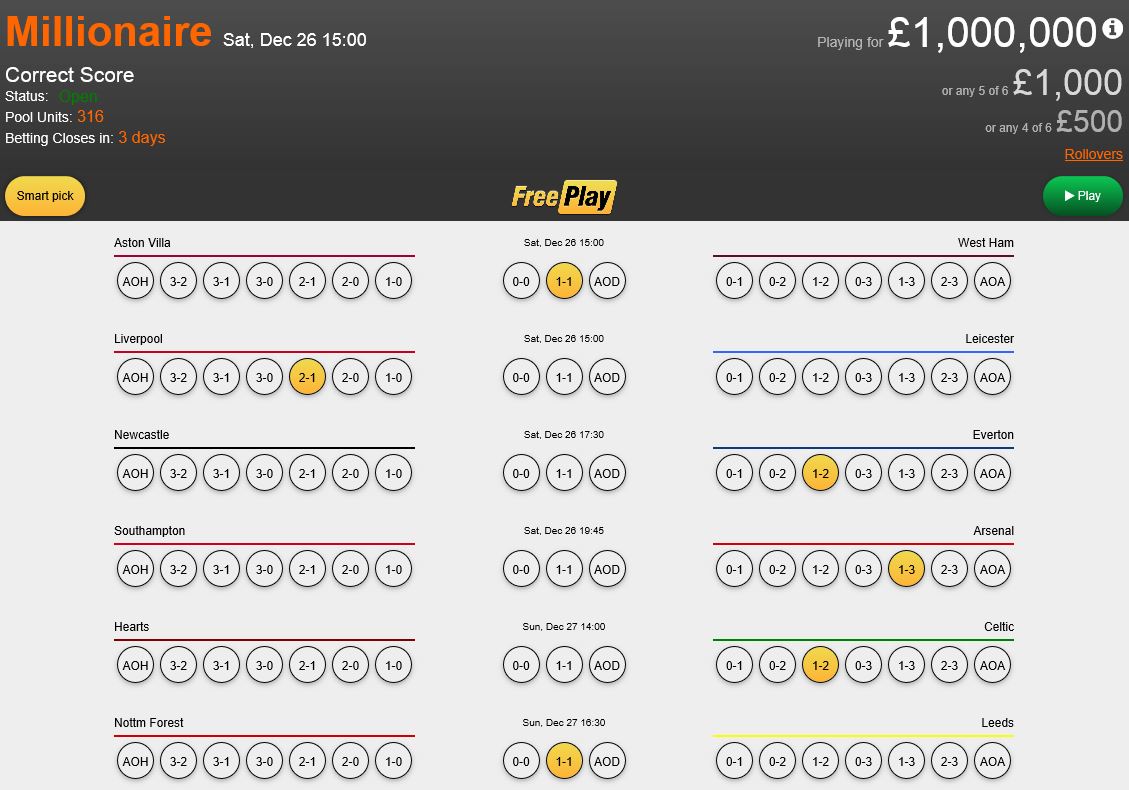 If Southampton don’t buck their ideas up pretty sharpish, they could be dragged into a relegation battle, as they are winless in their last six games and showed disappointingly little when losing 2-0 at home to Tottenham last week. They are struggling for goals.

And an Arsenal side with their tails up won’t need any second invitation to take advantage of any lack of confidence, so I take the Gunners to win 3-1 at St Mary’s.

I side with Celtic to win 2-1 at Hearts. That was the score line when they played in the Scottish League Cup in October, though Hearts did draw 0-0 at Celtic Park the previous month and have only lost once at home in the league.

If in doubt though, trust in Celtic, who have only lost two games in 18 in the league.

Nottingham Forest v Leeds is a tricky game to call between two mid-table sides, though to be fair Leeds have won three of their last four games and Forest are unbeaten in their last five.

Get your £1,000,000 FreePlay selections in by 3pm Saturday and play now at Colossus Bets!