No goals and only one point in their last two matches. Well, it can’t be long before people start calling for Claudio Ranieri’s head, can it?!

To be serious, many expected second-placed Leicester, fresh from only their second defeat of the season away to Liverpool on Boxing Day, to begin their slide down the table when they faced Man City at the King Power Stadium on Tuesday night.

And, while they definitely rode their luck at times – well, City dominated for large parts, in truth – they probably just about deserved the 0-0 draw, not least for simply hanging in there.

Visitors Bournemouth certainly won’t be any pushovers here. The sides drew 1-1 earlier in the season, and Bournemouth weren’t disgraced when losing 2-0 to Arsenal on Monday, their first defeat in seven games, a golden spell in which they beat Man Utd and Chelsea.

But they do tend to leak goals, and I think Leicester’s potent forward line could give them plenty of trouble here. I take the Foxes to get back on the score sheet and take this 3-1.

Norwich have done well at home this season, only losing three of their nine games at Carrow Road, and I think they will draw 1-1 against Southampton.

They lost 3-0 to the Saints back in August and do tend to blow hot and cold – as most relegation contenders do, I suppose – but they have beaten Man Utd away and Aston Villa at home in their last three games, so are clearly playing well enough at the moment.

Southampton ended a mini-slump with a staggering 4-0 defeat of Arsenal on Boxing Day and they must still be wondering how they managed to lose 2-1 at West Ham on Monday, such was their first—half domination.

But the answer may lie in the fact that they have won only twice away in the league this season, and I fancy a scoring draw here.

Sunderland have a quick turnaround after playing Liverpool on Wednesday night, but hopefully that won’t be too pressing a concern as they are hosting Aston Villa, against whom they drew 2-2 earlier in the campaign.

Now, obviously, Sunderland are no great shakes themselves – their 1-0 defeat at home to Liverpool on Wednesday night was their fifth loss in a row – and the league table tells you that these are the two worse sides in the league.

But the fact that Villa are on a winless league run of 18 matches, for all their occasional improvement in some recent draws, and struggle to score, suggests that you have to side with the home team here. I go 2-1 Sunderland.

Watford were very unfortunate to lose 2-1 to Tottenham on Monday but, a 3-0 defeat of Liverpool aside, they do tend to struggle when the top sides visit Vicarage Road.

So, for that reasoning, I think Man City could come away with a 2-1 win, for all that Watford have looked a genuine top-table side in recent games.

I am not confident of a City win by any means. They were frustrating in a 0-0 draw at Leicester on Tuesday night and have only won three out of nine away games themselves, but a narrow City win looks the percentage call here.

It shows you how far Chelsea have fallen this season that I feel that I am being a bit controversial in taking them to win 2-1 at Crystal Palace on Sunday.

That said, I imagine the bookmakers will have them as firm favourites, anyway. However, that does seem strange given Palace are nine places above them in the league, won 2-1 at Stamford Bridge in August and Chelsea have only won one of their nine away matches.

But there have been signs of improvement of late, albeit limited improvement in the absence of their main striker Diego Costa, and I think they could just better a Palace side whose home record isn’t great for a team sitting fifth in the table.

Everton have got to be the most frustrating side in the league, and it is staggering to see that they have conceded 19 goals in nine home games – comfortably the worst defensive home record in the league.

Martinez needs to sort that out quickly, because it obviously undermines the great work his forwards are doing. Other than Man City, they are the most prolific side in front of goal, at home, in the league.

Tottenham are a far more disciplined outfit, with only two losses all season and having conceded only 15 goals in 19 games, these sides drawing 0-0 in August. And they now have to considered genuine title contenders in a season where no side is laying down a convincing marker. 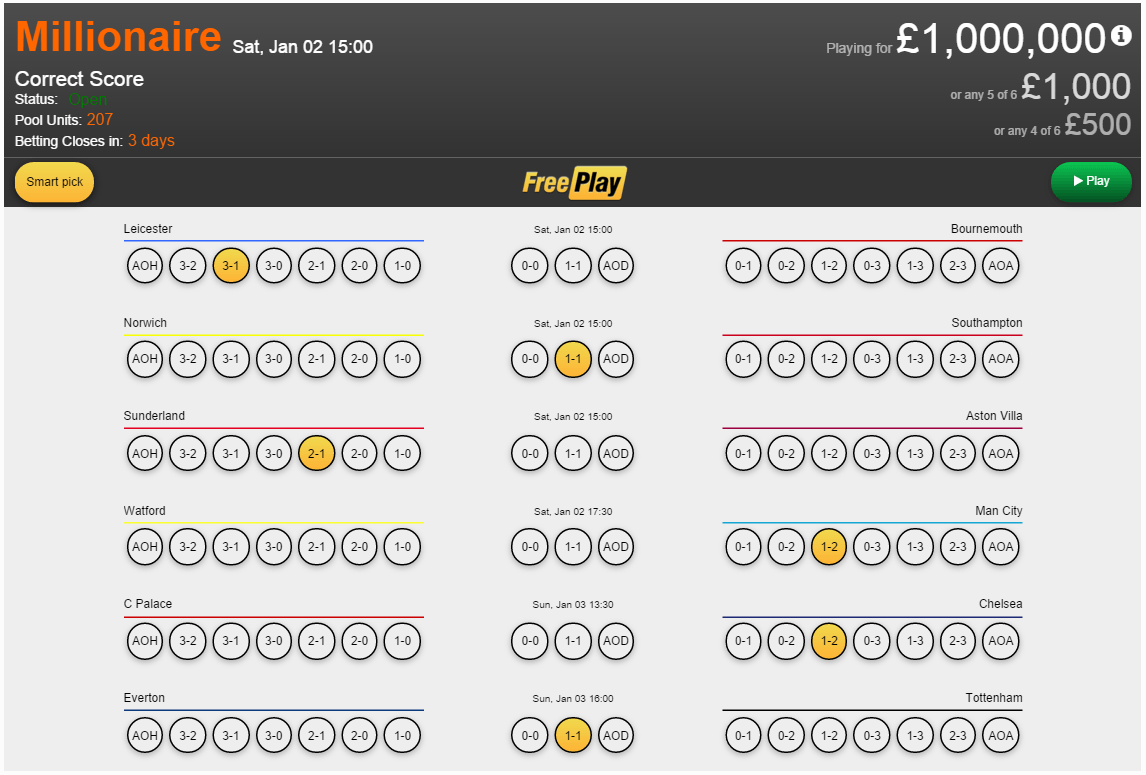 Get your £1,000,000 FreePlay selections in by 3pm Saturday and play now at Colossus Bets!