Here is a first for you – my top four prediction for the end of the season now contains five teams!

The boys at Colossus asked me to re-think how the Premier League table would look come May and it’s a bit of a head-scratcher I have to admit, especially after last weekend’s results.

Even with no team taking the league by the scruff of the neck, I think my pre-season fancies Chelsea now face an uphill struggle to get a Champions League spot, let alone retain their title.

If forced to name my top four as it stands – and I am being forced! – then I would go Man City, Man Utd, Arsenal and Liverpool.

City probably have the best XI when all their players are fit, Utd are very solid if not spectacular, Arsenal are Arsenal, and if Liverpool can reproduce their Saturday 4-1 win at the Etihad and get their players back from injury then who knows what they can achieve?

But then you have to factor in Tottenham, who are probably the form team in the league at the moment.

They only picked up three points in their opening four games in August but since then they have been the form side, unbeaten and numbering among their successes a 4-1 defeat of Man City.

So while you can’t really call them dark horses for the title now, you’d certainly be a fool to dismiss them. So they are my fifth team in my top four!

At the other end of the table, I think Aston Villa, Sunderland and Bournemouth are the likeliest relegation candidates at the moment, though Big Sam will no doubt have his side believing once again after their unexpected 1-0 win at Palace on Monday night.

Hopes that Villa may have turned the corner under new manager Remi Garde after a 0-0 draw against Man City were somewhat dashed when they were hammered 4-0 at Everton on Saturday, and you have to fear for them. And they have only scored three goals in six home games.

Watford have done equally as well on the road as at home this season, and only went down to an injury-time goal against Man Utd last week. My first instincts are that this a low-scoring draw, either 1-1 or 0-0, but if there is to be a winner it may be Watford 1-0.

As I said earlier, Sunderland’s tails will be up after their win on Monday night – and they won this fixture 3-1 last season – but they host a Stoke side that have gone back to basics it seems, and are very hard to play against, and beat, at the moment.

They haven’t conceded in their last three games, and 1-0 successes at home to Chelsea and away at Southampton underline what a good side they are on their day.

There is nothing new to say about Leicester’s season. For a side with their squad and wage bill to be topping the league after 13 games defies belief, and for Jamie Vardy to have scored in 10 successive games really is something else. I don’t know my best scoring run, but it obviously isn’t 10!

They face the meanest defence in the league when Man Utd visit at the weekend, but Leicester have scored in all their games, and I expect that to continue.

Tottenham to win by the odd goal for me, 2-1 or 1-0, but you can’t rule out Chelsea getting something from the game – and those away Thursday night Europa League games always worry me for teams like Tottenham – so I’ll also throw in 1-1. 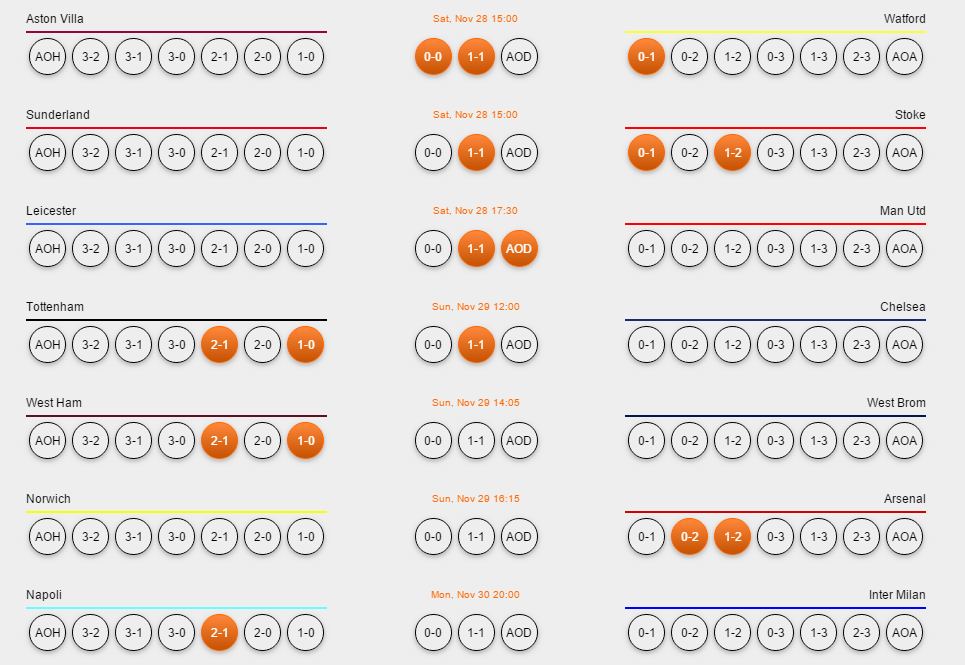 But this is another match where the corresponding fixture saw the home side win 5-3 last season, so maybe utilise that Any Other option!

West Ham were put in their place by Tottenham last weekend, while West Brom rode their luck to a certain extent to secure a shock 2-1 home win over their North London rivals Arsenal 2-1.

It’s a tricky one to call but the percentage play is probably to side with West Ham either 1-0 or 2-1, though it has to be pointed out that West Brom have won half of their six away matches.

Arsenal will be looking to bounce back from last week’s defeat, but they won’t find it easy against a Norwich side that have got their act together defensively since a 6-2 drubbing at Newcastle.

They have only conceded five goals in as many games since, going down 2-1 and 1-0 at City and Chelsea respectively. But it could be another defeat at the hands of a top side, and I take Arsenal to win 2-0 or 2-1.

Napoli are unbeaten in six games at home this season, winning five, and sit second in Serie A.
But they happen to be hosting league leaders Inter, who are unbeaten away from home.

You clearly can’t rule out any outcome but I’ll side with the home team 2-1.