With the exception of Man City at Aston Villa, where you can easily see the away side scoring a few, I fancy that all the games in this week’s £10 million Colossus will be tight affairs.

And that makes my perm much easier to structure. Or, let’s hope so anyway!

Norwich v Swansea is a classic case in point, where no outcome would surprise you. And the bookmakers seem to agree, with the home side the marginal favourites.

I just favour Swansea myself. This is no “damning with faint praise” line but they are simply a solid mid-table outfit who on their day can topple the best sides in the league – as they showed in a 2-1 defeat of Man Utd in August – but are more than capable of throwing in the odd stinker, too.

I wouldn’t necessarily include their 3-0 home loss to Arsenal last week in the latter category as they gave as good as they got in the first half. But they can struggle in front of goal.

However, Norwich are conceding at a rate of over two goals a game – granted, their 6-2 defeat at Newcastle skews that statistic slightly – and have lost three of their five home games.

They were slightly unfortunate to lose 2-1 to a late penalty at Man City last week – their goalkeeper had a brain-freeze there – and had earlier drawn 1-1 at Everton. But I take Swansea to nick a tight game either 1-0 or 2-1, but I have to include 1-1, too.

West Ham’s magic on the road was missing at Watford last weekend but they are really getting their act together at home, and their game against Everton is another virtual “pick em” with the bookmakers.

Everton bounced back to form with a 6-2 rout of Sunderland last week and are a team I have a lot of time for, and I can see them winning 2-1 at the Boleyn.

But matches between these sides saw goals and were very close last season – they played four times and there were 1-1 and 2-2 draws, with Everton winning the other games 2-1 – so I’ll add in 1-1 and Any Other Draw (AOD) as well.

Chelsea arrested their slide with a much-needed 2-1 win over Dynamo Kiev on Wednesday night, but let’s not get carried away. That would have been a “routine” win last season and wouldn’t have needed a late, brilliant Willian free-kick to settle the nerves. And that is without mentioning that their opener was an own-goal.

It is hard to believe that they have lost six of their opening 11 league games. And they will know full well the task that awaits them at Stoke, having been knocked out of the Cup there last month.

But Stoke aren’t playing that well themselves, having lost three of their five games at the Britannia and are currently pretty impotent in front of goal, too. A tricky match to call but I fancy a low-scoring 1-1 draw, and 0-0 wouldn’t surprise me, so that’s my back-up score line. 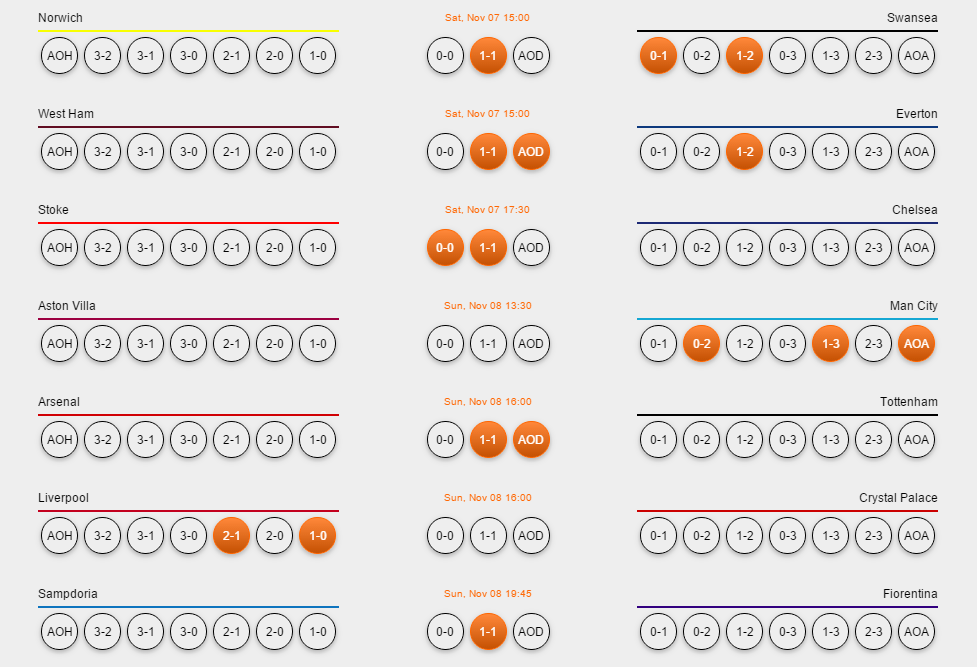 Villa fans will be hoping that new manager Remi Garde can work some magic, and quickly, when they host Man City at the weekend because their prospects look pretty bleak otherwise.

City have coped remarkably well with injuries to key men Aguero and Silva, and impressed again in a 3-1 win at Sevilla on Tuesday night, while Villa are rock bottom, their only league win coming on the opening day of the season at Bournemouth.

If City are currently without two key players, then Arsenal’s injury list must be nearing double figures and they were dismissed 5-1 by Bayern Munich on Wednesday night.

So Tottenham may well fancy their chances at the Emirates on Sunday, especially after convincing wins at Bournemouth and at home to Villa. And at least they played at home in the Europa League on Thursday night.

But Arsenal, who knocked Spurs out of the Cup at White Hart Lane earlier in the season, can still field a pretty impressive XI and I can see a repeat of last year’s score line of 1-1 in this fixture. It could easily be an open game though, so I will also go with AOD.

Liverpool would hardly have had the ideal preparation for this, having played in Russia on Thursday night, but there is no denying that Klopp has made an immediate impact. And I have to fancy the Reds to see off Crystal Palace, either 2-1 or 1-0.

They still have a long way to go but that come-from-behind 3-1 win at Chelsea last week would have done wonders for morale.

Palace won’t be pushovers though, and won both of their league fixtures against Liverpool 3-1 last season. And they were the better side in a 0-0 draw with Man Utd last week. But they are short of goals at the moment and I favour the home side, even though that Europa League trip is clearly a negative.

Sampdoria have won four and drawn two of their six home games this season, but they face a tough task when league leaders Fiorentina visit on Sunday.

But, at the risk of sounding like a stuck record, Fiorentina were in action in the Europa League on Thursday night, so I’ll sit on the fence and go 1-1. They both won their home games when they met last season, but a draw looks the sensible play here.