Whenever the Colossus consists of all Premier League matches, I think most punters fancy their chances just that little bit more – and, let’s face it, with seven correct scores to predict we need all the help we can get!

Then again, that is why the prize is a life-changing £10 million, so no-one said it would be easy.

And easy is the last thing most people thought Leicester would find the Premier League this season under a new manager in Claudio Ranieri. But they have proved the doubters wrong so far – including my good self – with a tremendously impressive start to the campaign that has seen just one defeat in nine games. And even in that loss they scored twice.

Furthermore, they have netted in their 11 games in all competitions this season, and are fully deserving of their fifth place in the table.

They again showed their never-say-die attitude when coming from 2-0 down to force a 2-2 draw at Southampton last week, and I think it could be a similar result when they host a Palace side just one place, and one point, below them in the league table.

Palace did the double over Leicester last season and curiously seem to reserve their better performances for away from home, with West Ham being the most recent side to win at Selhurst Park last week.

It’s a scoring draw for me though, with 1-1 and Any Other Draw (AOD) selected for my perm.

If Leicester have been the surprise positive of the season to date, then Chelsea have obviously been the shock negative, with a thoroughly unconvincing start punctuated by some erratic, and often bizarre, behaviour by Jose Mourinho, who is normally so assured.

And I don’t think that a 2-0 home defeat of Aston Villa and a 0-0 draw in Kiev on Tuesday night is evidence that they are out of the woods just yet, for all their undoubted quality.

And in West Ham they meet a side who have revelled in the underdog tag this season, winning at Man City, Arsenal and Liverpool, as well as Palace last week.

But their home form is nowhere near as impressive, so I take Chelsea to nick a tight game 2-1 or 1-0, with 1-1 as back up. Surely, the tide has to turn soon.

You certainly can’t argue with Arsenal’s recent form and they look to have turned the corner with thumping 3-0 wins against Man Utd – where they played sublime football in the opening 20 minutes – and Watford, before beating Bayern 2-0 on Tuesday night to belatedly give themselves a chance of Champions League qualification.

Arsenal beat Everton 2-0 at the Emirates last season and that is my main fancy this time around, with 1-0 and 2-1 added in, too. I didn’t see Everton’s 3-0 home loss to Man Utd last week coming at all, having been very impressed by them beforehand.

They still look a good side to me though, with top six potential. but Arsenal in their current mood are likely to prove too strong. 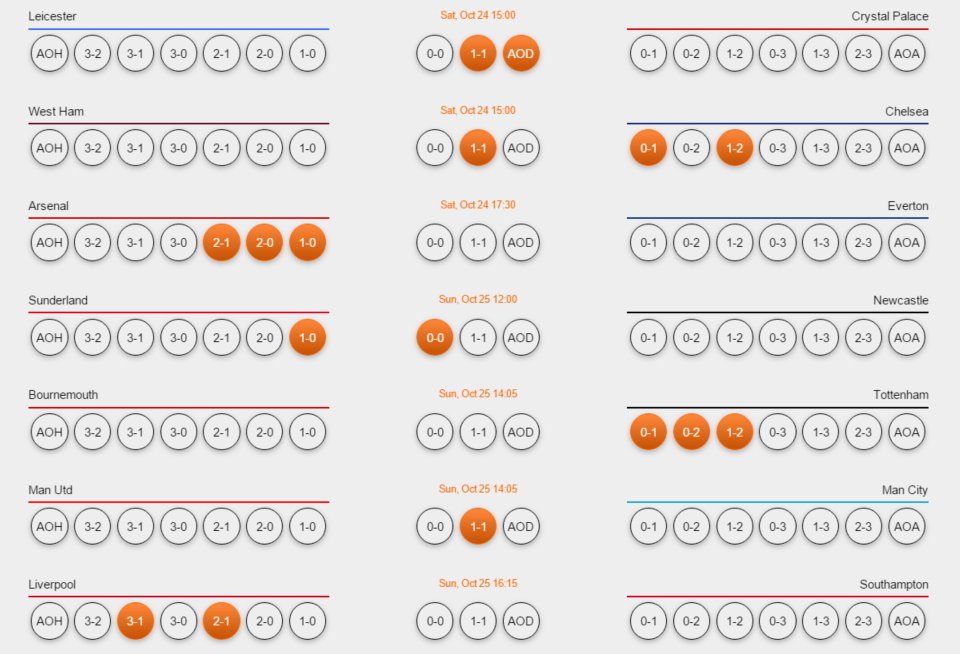 If Big Sam didn’t know that he had a big job on his hands at winless Sunderland, then he soon found out when they lost 1-0 at West Brom last week, for all that he thought they were very unfortunate to lose.

Not losing, or conceding, has always been Sam’s starting point in matches. And I’m sure he will look to avoid a morale-sapping loss to Newcastle at all costs here.

To be fair, Sunderland have dominated this fixture of late, winning the last five meetings, with a brace of 1-0 successes last season, and 0-0 and 1-0 are my idea of the most likely scorelines.

Newcastle obviously found their goalscoring boots in a 6-2 home win over Norwich but I think it’s safe to say Sunderland won’t be so open and accommodating here.

Bournemouth have suffered some cruel injuries in the past month or so and were mauled 5-1 by Man City last week. But they look pretty strong at home, with their only loss a possibly undeserved 1-0 defeat by Villa on the opening day of the season.

But Tottenham, with only one league defeat to their name, are likely to have too much for them and I take 2-0, 1-0 and 2-1 in my perm, despite that Europa League game at Anderlect on Thursday night.

And that leads us to the game of the weekend, with City playing Utd in the Manchester derby. I am sitting on the fence here and going 1-1, as no outcome would surprise me. Recent results in this fixture have thrown up some big surprises.

City have coped well with the loss of Aguero and Silva in recent games, with De Bruyne and Sterling stepping up to the plate, while Utd have been playing well, that Arsenal defeat aside. I was in Moscow on Wednesday night to see them draw 1-1 with CSKA, and they would have been happy enough with the point.

Travelling to Russia in midweek is hardly ideal preparation for a Manchester derby, but I will stick with 1-1.

Liverpool were also in action in the Europa League on Thursday night but at least the game was at Anfield, and I expect them to take care of Southampton, either 3-1 or 2-1.

Southampton are unbeaten away from home this season and are a side that I have a lot of time for, but Klopp will begin to improve this Liverpool outfit – a 0-0 draw at Tottenham last week was a good starting point – and I can see a pretty convincing home win here. The Reds did the double over Southampton last season, too.