What a difference three results make. A fortnight ago everyone was crowning Man City champions-elect after they opened their campaign with five straight successes without conceding a goal, and bookmakers made them 1-3 chances to win the Premier League.

But a home loss to Juventus in the Champions League seems to have re-ignited a lack of belief, however fleeting that may prove to be, and a 2-1 defeat at the hands of this season’s giant-killers West Ham at the Etihad, then a 4-1 drubbing at White Hart Lane on Saturday has led to their title credentials being questioned.

As ever in these circumstances, the “truth” of their situation lies somewhere in the middle of the two extremes, especially as they were without Hart, Silva and Kompany last weekend. Furthermore, Toure went off injured and Aguero may not be firing on all cylinders at present.

So it will be interesting to see how they get on at home to Newcastle this weekend – and a last-minute 2-1 win in Europe on Wednesday night will surely have helped their confidence – as on paper that does look a gimme three points, even allowing for the Magpies’ improved showing against Chelsea.

But they don’t feature in this week’s £10 million Colossus, so I better move on, and the opening leg is Aston Villa v Stoke.

Villa showed a bit of fight in going down 3-2 at Liverpool at the weekend but the facts are that they are 18th in the table and haven’t won in the league since an opening-day 1-0 victory at Bournemouth. They are odds-on to be relegated.

But while Stoke managed their first win of the league campaign with a 2-1 win at home to Bournemouth on Saturday, I have to just favour Villa to win this 2-1. But you can’t be confident and I fancy goals, so I will add in 1-1 and Any Other Draw (AOD).

Leicester may have suffered their first reverse of the league season in a 5-2 loss at home to a rampant Gunners side, but they went down all guns blazing at least and their fans are certainly getting value for money.

And I have a feeling that they could just see off a Norwich side who were only minutes away from pulling off a shock win at West Ham on Saturday, only to concede an injury-time equaliser in a 2-2 draw.

Goals look assured – Norwich have scored eight goals in their four home games in all competitions, while Leicester have scored in all of their nine matches – so I am going 1-2, 1-1 and AOD.

What to make of my pre-season title fancies Chelsea at the moment?

However fortunate they may have been, you half-expected their 2-0 defeat of Arsenal to kick-start their season, even with Costa suspended for three games, but as it was they needed two late goals to rescue a point at winless Newcastle on Saturday evening.

So it may not be all plain sailing at home to Southampton, especially since their opponents have returned to goal-scoring form in recent games and Chelsea’s air of invincibility at Stamford Bridge was shattered by Palace last month.

And the sides drew 1-1 in both of their league meetings last season. 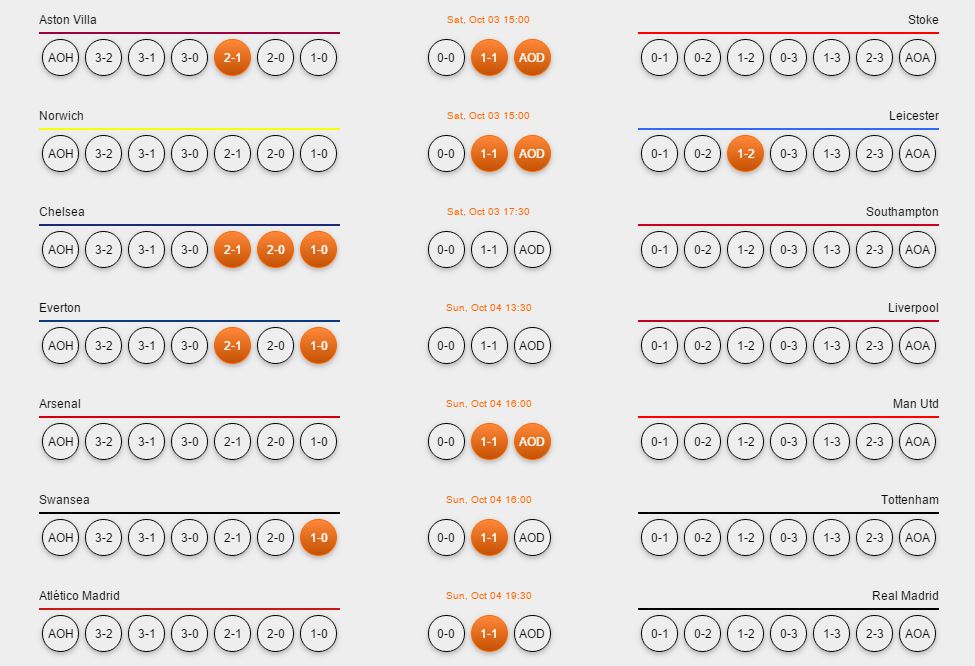 Everton have really impressed me this season and they have not looked back since a 2-0 home loss to Man City.

They have dug in on the road in the league, grinding out results as well as coming from behind to win 3-2 at West Brom on Monday night, and of course played Chelsea off the park in a 3-1 win at Goodison earlier in the season.

And while Liverpool stemmed the tide in a 3-2 win against Villa at the weekend, where it was good to see Sturridge back among the goals, they will find this Merseyside derby another step up in the class and intensity stakes.

These games were tight affairs last season, this fixture ending 0-0 while it was 1-1 at Anfield, but I favour Everton to nick this 1-0 or 2-1.

There is another huge game when Arsenal host Man Utd, especially after the Gunners shock 3-2 home defeat to Olympiakos on Tuesday.

It is odd to see United top the table again, but they have deserved it, scoring nine goals in their last three wins, where Martial has clearly made a big impact in a short space of time. Expensive but effective so far.

Arsenal may have finally clicked at Leicester last week but their record against the top teams is pretty abysmal, and indeed they lost this fixture 2-1 last season. And that Champions League defeat, in stark contrast to Utd’s come from behind win against Wolfsburg, in midweek must have hurt.

However, Arsenal did beat Utd in the FA Cup and drew 1-1 at Old Trafford in the league, so I’ll go 1-1 and AOD.

Tottenham did the double over Swansea last season and many will be expecting the same result after their 4-1 defeat of Man City at the weekend.

But while Swansea have lost three of their last four games, they are unbeaten at home this season, and I fancy they could nick this 1-0, with 1-1 as a back-up.

This may be predictable, but Tottenham do have the little distraction of having played in the Europa League at Monaco on Thursday night.

Atletico and Real played each other an incredible eight times last season, with Atletico coming out better and unbeaten in their four home games, winning three.

But while Real have been hit and miss this season – though they won away in the Champions League on Wednesday night, while Atletico lost at home to Benfica – we all know their potency, so I’ll sit on the fence and go 1-1 in the last leg of the Colossus.

MICHAEL OWEN’S £1,000,000 1X2 PICK15 SELECTIONS
IS EDEN HAZARD SUFFERING FROM TOO MUCH PRESSURE AT CHELSEA?