After an excellent opening day win it’s been a pretty dismal season for Lille under the tutelage of Marcelo Bielsa, so a visit from the champions is the last thing they need. There is, however, one glimmer of hope for the hosts in that Monaco may well have one eye on their upcoming Champions League clash with Porto. The last time that was the case Jardim’s men were thumped 4-0 away to Nice and while I’d back the visitors as favourites, I’m covering my back for the first game of the ticket in case such an eventuality plays out once more.

Another team hoping that their opponents will be preoccupied by their European endeavours, Rangers are unlikely to get any favours from Celtic’s starting line-up given the nature of their rivalry. Simply put Rodgers’ side are far superior to their hosts these days, winning 5-1 on their last trip to Ibrox and while it may not be so comprehensive this time around an away win should be a safe bet.

It may not have been a thrilling way to start life at their new stadium but Atletico followed their 1-0 win over Malaga with a good victory at Athletic and are back on track after a slow start. The visit of Sevilla will be a tougher test than this time last week, with Eduardo Berizzo having made a strong start in charge of the visitors, particularly from a defensive standpoint. They’d take a point and it’s certainly not beyond them, so a home win or draw is my tip.

While United’s goal difference is perhaps a little deceiving, so often have they put results beyond doubt in the final ten minutes, the combination of a strong defence and potent attack has seen them off to a flyer. The same can’t be said of Southampton, who are still struggling in the final third, with half of their modest 4-goal tally coming from the penalty spot. Mourinho’s men might not end this one with such a comprehensive scoreline but should maintain their strong start.

Prior to a hammering at the hands of City last weekend, many were already tipping Watford as a dark horse this season after a fine start under Marco Silva. They’ve been brought back down to earth a little then, but will be eager to respond after last week’s collapse and have had the benefit of a full week’s preparation with no EFL Cup tie in the week. Swansea picked up another solid away point but failed to register a shot on target for the third game already this season at Wembley and lack the fluency in attack to win this one in my opinion.

Many may well have this game down as a nailed on stalemate but traditionally the two don’t tend to share the spoils. The last six meetings have seen each team win three, with Burnley on top in the last three in fact. Chris Wood has an excellent record against the Terriers, scoring 8 goals, and could be the difference but I wouldn’t necessarily write off the visitors either in what will no doubt be a tight game.

Take two from the EFL Cup tie on Tuesday night, Liverpool will be desperate to turn the tables and should name a strong side despite their European commitments in order to put an end to a disappointing run. They started strongly against the Foxes and suffered following Coutinho’s half time withdrawal so with the likes of the Brazilian and Salah back in the XI the Reds should have a little too much for their hosts time time around.

The home side have had a dreadful start to the season, and a 5-0 defeat to Valencia in the week will have dented their spirits even further. The Andalusians have scored just once and face an Athletic side that boast a strong defence and will be aiming to get back to winning ways after two defeats. The visitors have the quality to really leave Malaga in a dire state and should do just that. 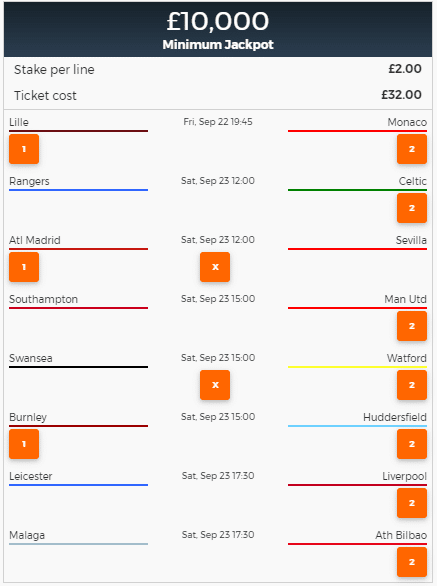