Another weekend of Colossus Bets and another Saturday Pick Six Millionaire pool!

Liam Canning has previewed his Syndicate selections for us and you can get involved in his ticket here.

Burnley were in superb form in the last few weeks, but a few poor results have damaged that streak and they are no longer looking as assertive in their play. They have done enough for safety and are now just aiming for a European qualification spot, although that will be tough. Manchester United have just come off of a 3-0 win v Stoke, and are in high spirits. An away game at Turf Moor is never an easy game, which is why it could be an incredibly cagey affair.

The Foxes have drawn two and won one of their last three games, with the most impressive coming away at Stamford Bridge in what earned them a valuable point. Claude Puel has stabilised the club and has them moving forward in a positive direction. Unfortunately for Watford, the reverse is happening with the Hornets. Marco Silva has lost his swagger and Watford’s confidence is depleting considerably. If they are not careful, they are going to be drawn into this almighty relegation dog scrap. Leicester should have the quality to claim the three points.

In all fairness to David Moyes, he has shut off his critics for the time being as he is currently doing a superb job with the Hammers. West Ham are now in 11th spot, with the confidence to break into the top 10 for the first time this season. Eddie Howe’s Bournemouth have been given a huge boost after their crucial comeback win against Arsenal. This game could well end up in a point apiece. 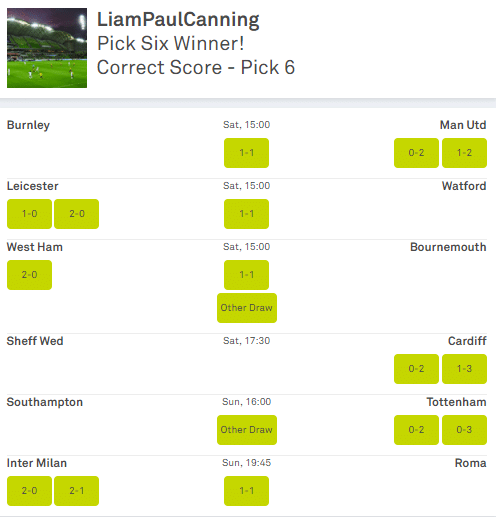 Cardiff have exceeded expectations massively this season in the Championship as they are only two points off an automatic qualification place. Boss Neil Warnock has given Cardiff new life this season and are in superb form. For Sheffield Wednesday, they have been disappointing for the majority of the season. However, with their new boss, things should improve form now until the end of the season, but you would expect Cardiff to keep the pressure on Derby County.

It is no revelation to suggest Southampton have massively underperformed since Mauricio Pellegrino came into the dugout. Sitting in 17th place, one point above the drop, it is squeaky-bum-time for Saints as they aim to avoid relegation. Their opponents for this weekend, Tottenham, are in sensational form and will be no easy team to take points from. Harry Kane is currently the best striker in the world and will look to punish Saints.

After such impressive starts, both Inter and Roma have let their foot off the gas in the last few months, but they are still in the hunt for a top four finish. Inter have only lost two games all season, but too many draws have cost them important points. For Roma, they have lost double the amount of games and have scored the least amount of goals out of the top nine teams in Serie A. The Nerazzurri should claim the three points here.

You can join Liam’s Syndicate here