Introducing Alive and Kicking: Making durable balls in Africa to create employment and educate about health

Introducing Alive and Kicking: Making durable balls in Africa to create employment and educate about health

Who are Alive and Kicking?

Having been established in 2004 by Jim Cogan OBE, Alive and Kicking are a charity 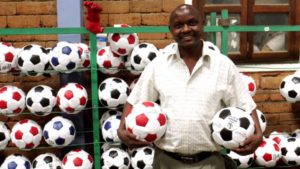 who act as a social enterprise to Africa and seek to create opportunity through the production of sport balls. They have described their vision of “an Africa where every child can play with a real ball, where thousands of jobs are sustained in the production of balls and where sport contributes to the eradication of deadly disease”.

What do they do?

Currently operating in Kenya, Zambia and Ghana, Alive and Kicking seek to produce durable, hand-stitched balls with a distinctly African style in areas of high unemployment. Their production keeps 140 people in Nairobi, Lusaka and Accra in full-time work. With each of the staff supporting an average of six people with their wage, Alive and Kicking directly support a community of over 800.

Hand stitching the balls means that they can become health educational tools; the 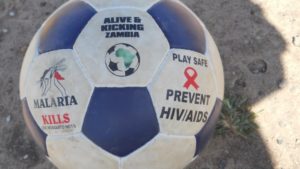 balls in the health awareness programmes bear simple health messages, allowing the information to be absorbed over time. Additionally, it allows them to promote a range of causes, from peace and reconciliation to wildlife conservation.

It is a common sight across Africa to see children making improvised footballs from plastic bags and string. Alive and Kicking have made over 700,000 sports balls since 2004 and each one has given someone, somewhere the chance to play. For many children, an Alive and Kicking ball is the first real ball they have ever played with.

With 2.75 million people living with HIV/AIDS in Kenya and Zambia and 3.5 million people contract malaria every year in Ghana, they also train local community leaders to deliver health messages themselves, ensure that their work has an ongoing impact.

Why have we chosen to support them?

Can a football change a life? The idea of Alive and Kicking was inspired by a

makeshift football being kicked around an African street. What if those kids had a real, durable ball? What if making the ball generated employment for those in need? What if it all became a conduit to deliver vital health education? At Colossus, we believe in making sports bigger. Well, it rarely gets bigger than this.

What is Conscious Colossus?

Conscious Colossus is a charitable initiative designed to target several areas of responsibility and covering a wide range of causes, including the advancement of sport within communities, responsible gambling education and animal welfare. Our nominated charities are Alive and Kicking, the Greyhound Trust and YGAM. Conscious Colossus commits to support these charities through funding, team volunteer days, fundraisers as well as raising awareness of their objectives through our own channels.

Introducing The Greyhound Trust: Homing over 4,000 greyhounds per year
Alive & Kicking: The Story Of The Ball