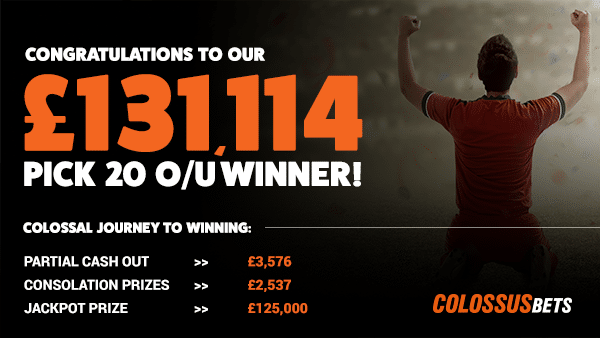 Last weekend, our Pick 20 Over/Under pool was full of drama. With late goals, nerves and elation, the pool had it all.

After only the third week of our Pick 20 Over Under pool, we have a winner! A German based Colossus customer turned his £64 ticket into a massive £131,114 win! I guess that means the next holiday is on him… 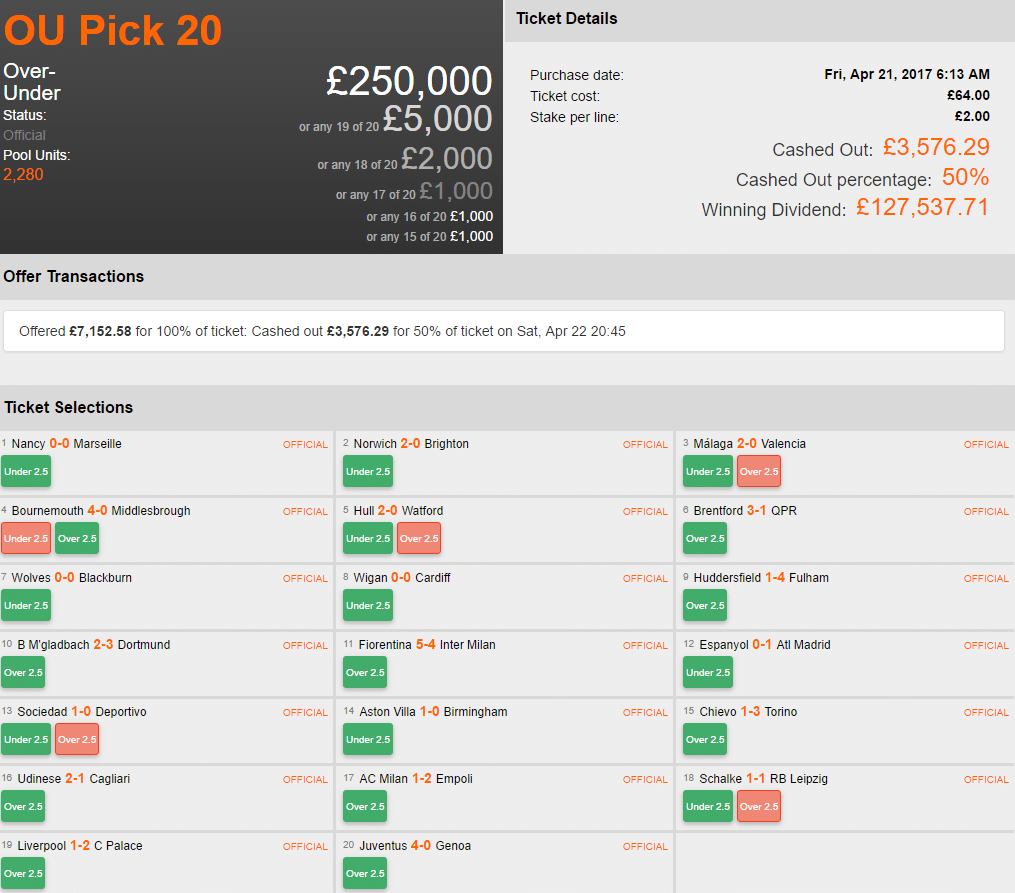 After successfully predicting the first ten legs, the ticket holder was in great shape. By half time in legs eleven and twelve, his Cash Out offer was £7,152.58. This offer proved too good for the customer to let pass, with £3,576 being banked through cashing out 50% of the ticket.

Fast forward 7 legs…and after Christian Benteke scored a winner for Palace, the ticket was offered a monumental Cash Out. £71,091 was offered for the remaining 50% of the ticket. With nerves of steel, he resisted the offer!

When asked about resisting the £71k Cash Out offer, the customer explained the temptation of the offer.

“Having already cashed-out £3.5k for 50% on Saturday night I generally was prepared to let any future Cash Out offers go. The offer of £70k before the last leg was painful however. I was so tempted to sell another 10% but glad I didn’t!”

One leg remained. Juventus vs Genoa. Over 2.5 match goals was needed. If that landed, he was on to a winner!

Two goals in two minutes for Juventus and the ticket looked strong.

He was the edge of his seat. 72 minutes left in the game and one goal needed. Could it be?

Just before half time, Juventus made it 3-0 and our customer was jumping for joy. He owned the sole winning ticket in the pool and scooped over £131,000 in the process! When asked about his reaction to winning the pool, the customer said: “The Juventus game was very nervy, but luckily Juventus got the job done pretty early. We all went bonkers at 3-0, I’ve been in shock since!”

Our winner joined Colossus using the Refer a Friend (RAF) scheme within the last year, meaning that because he wins, his friend also wins! His friend will earn £2,625.48 from the winning ticket!

This isn’t the only thing that his friends will get from the win either. When asked how he planned to spend the £131k, the customer replied “Nothing concrete yet, but me and my friends enjoy a few long weekend trips to Majorca – so I suppose the next one is on me!”

His friends were with him to experience the excitement all through Sunday night. As the customer explained: “I was watching the Bundesliga on Sunday with friends and keeping a close eye on the other matches. We started to get really excited at about 4pm when there were just 3 legs to go.” TwoPoundPunt is a regular Colossus Syndicate Captain. 117 contributions were made in his Over / Under Pick 20 Syndicate, including users from Nairabet, Merrybet, Betfair and Betdaq getting involved in the action.

The Syndicate came agonisingly close to winning, missing out by only one goal in the Schalke vs RB Leipzig match, having resisted a £30k+ Cash Out offer on Sunday evening! But thanks to the pools consolation prizes, the Syndicate still returned over £2,700, a 5 fold ROI.

Could you be our next Colossus Winner?

You can get involved in this week’s Colossus Bets Pick 20 Over / Under pool HERE.