Three of our biggest Syndicate wins ever

Three of our biggest Syndicate wins ever

Whether you’re a novice or an experienced player, Syndicate betting can be a fantastic way to tackle tricky pools as a group. We decided to take a look at three of the biggest Syndicate wins in Colossus history.

In May 2017, TwoPoundPunt‘s Syndicate tackled an Asian Handicap Pick 20 pool featuring matches from England, Spain, Italy, France and Scotland. Despite the diverse array of legs, the Syndicate managed to blitz the pool, ultimately landing a £44,433 return from their £1,024 ticket. However, it was nearly so much more. 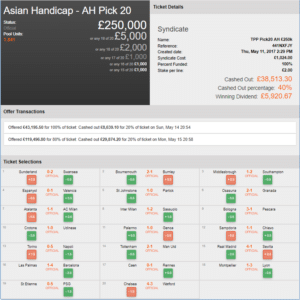 Having successfully navigated their way through 19 of the 20 legs, the 191 Syndicate contributors needed Chelsea to beat Watford by two or more goals to claim a huge return from the £250,000 pool. After a vast Cash Out offer landed overnight, they had already secured £8,639 in exchange for 20% of the ticket and knew that the worst case scenario was an 8x return on their initial stake.

A topsy-turvy match reached half-time with Chelsea leading 2-1 and, with the Blues firmly in the driving seat, TwoPoundPunt received an enormous offer of £119,497 for the ticket. Amid much buzz on social media, he opted to take a further 20% which amounted to £29,874, guaranteeing them £44,433 in total but leaving up to £150,000 still available if Chelsea could stretch their lead.

Ultimately, after a thrilling second half, the ticket would fall short, with Chelsea winding up 4-3 victors despite Watford finishing the match with ten men. Though it could have been so much more if Chelsea had scored again or conceded once less, a 44x increase on their stake, thanks to some strong decision-making from TwoPoundPunt, will still have left the Syndicate beaming.

Correctly assuming that Southampton vs. Watford, the opening leg, would be low-scoring, Vuoksenmaa backed 1-0 to both sides in addition to the 0-0 and 1-1 draws. It proved to be 1-1, getting the ticket off to a winning start. Similar success arrived in the second leg, Newcastle vs. Bournemouth, with the Toon Army narrowly winning 2-1 at St. James Park. Legs three and four also went to plan, with a 1-1 draw between Huddersfield and West Ham and a 1-0 victory for Tottenham over Crystal Palace allowing the Syndicate to end the day with four winning legs from four.

A hugely successful Saturday deserved a fitting Cash Out offer and Vuoksenmaa was offered €3,336 for the ticket. It certainly would have been a decent return on a €128 outlay but having five selections in the next leg gave the ticket an excellent chance of progressing even further. As such, Vuoksenmaa opted to take €1,000 for 30%.

Putting faith in his original predictions proved to be a shrewd choice the following afternoon, as an 86th minute equaliser earned Arsenal a 1-1 draw and gave the Syndicate another offer on the back of a fifth winning leg. There was now €6,059 on the table for the remaining 70%.

This time the decision was less straightforward as in the final leg, Ac Milan vs. Juventus, he had made just a single selection, 2-0 to the Turin side. Ultimately, Vuoksenmaa opted to sell a further 50% of the ticket, adding €4,327 to the pot and leaving 20% riding on the match.

Juventus got off to a promising start as Mario Mandžukić put them ahead in the eight minute. As they entered the last ten minutes, it was still 1-0 and time was running out. However, Juventus were blessed with arguably the greatest match-winner all time in Cristiano Ronaldo, who stepped up to add a second in the 81st minute. With no more goals, the ticket had won and, despite having 20% of the ticket remaining, the Syndicate won another €20,066, bringing their total to a superb €25,394.83.

BetBoss’ Syndicate demonstrates the power of Cash Out

Another stunning win for an Asian Handicap Pick 20 Syndicate, this time Captained by BetBoss, came on a weekend in August 2018. It was a story that truly demonstrated the power of Cash Out.

After enjoying success in the first batch of legs on the Saturday, the group were offered £3,572 for the ticket and elected to take 40% of it, which amounted to £1,428.

The evening produced more favourable results and, in turn, another generous Cash Out offer. They were offered £8,357 to buy the remaining 60% but, with things going so well, BetBoss opted to Cash Out just 10%, adding a further £1,392 to their total. 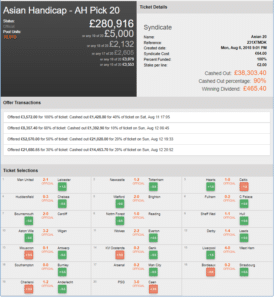 With nearly £5k in the bank and 50% of the ticket left to run, the Syndicate sailed through Sunday’s fixtures, reaching the last leg. After making such startling progress, the biggest offer yet came in and they were offered £52,570 for the remaining 50% of their ticket. He opted to take another 20%, which amounted to £21,680.

In the final leg PSG were hosting Caen in Ligue Un. Having backed Caen +2.5, the Syndicate knew that there winnings would be topped up even more if Caen could avoid losing by three goals or more. However. at half time, things weren’t looking good. Neymar and Adrien Rabiot had given the Parisiens a two goal lead.

Despite the leg truly hanging in the balance, yet another strong offer materialised at half-time. BetBoss was offered £21,680 to Cash Out the remaining 30%. He took 20%, meaning that they had sold 90% in total, and must have had a wry smile on his face when PSG ultimately scored a third and the ticket lost.

The losing £64 ticket had been converted into £38,768, a 605x increase on the original stake. What a story to truly portray the power of Cash Out.