There’ll be plenty of intrigue around the curtain raiser in the Bundesliga on Friday night, as Borussia Dortmund embark upon life without Pierre-Emerick Aubameyang, having signed Michy Batshuayi to replace to Gabon international. This game will also see Peter Stoger take on his former employers, who it’s fair to say have been vindicated in their decision to part ways with the Austrian.

Koln have now picked up 10 points from the last 12 available to give themselves a shot at survival having failed to win a single league game this season under their old coach. Stoger isn’t faring a great deal better in his new surrounds following three consecutive draws and this one could well go the same way.

The other Friday night game on the ticket is another tough one to call, with Bristol City likely to be slight favourites at Bolton. The Robins still have aspirations of automatic promotion, while their hosts are very much embroiled in a relegation battle, but their form in recent weeks and months isn’t too dissimilar.

The visitors have picked up nine points from their last six league away games, while Bolton have managed 11 from their last six at home and are now proving to be very competitive at Championship level after a dismal start. Another draw could be on the cards.

I can’t see any upset at Turf Moor given Burnley’s struggles to maintain their superb early season form, having now lost each of their last three home games, albeit against Tottenham, Liverpool and Manchester United. The visit of league leaders City is certainly not any easier though, and while it may only be by a narrow margin, expect Guardiola’s men to return to winning ways on the road.

The impressive form of Eddie Howe’s side has gone somewhat unnoticed as the Cherries have begun to distance themselves from the relegation battle with much needed back-to-back home wins. If Paul Lambert is to ensure that Stoke can bridge the gap to their hosts this weekend in the long run then he will need to remedy a dismal away record, with just six points on the road making them the worst travellers in the Premier League. He’d probably take a draw in an attempt to gain a little momentum, but the home side should just have the edge. 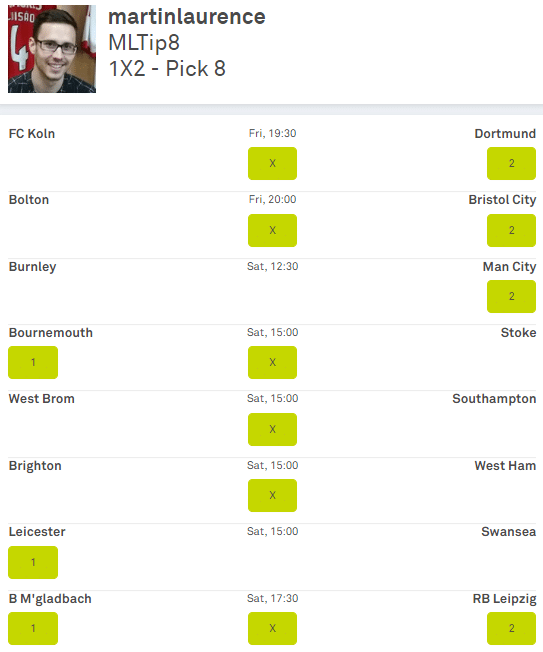 A big match at the bottom between two sides that few would have predicted would find themselves in the thick of a scrap for survival, the Baggies and Saints find themselves in such a situation due to their inability to turn draws into wins. The only two sides to have reached double figures in the stalemate stakes this season, there have been just three goals in the last four meetings between the sides at the Hawthorns and it’s difficult not to see this one following suit.

Another game that is tough to call this weekend, there are too many reasons to suggest that neither Brighton nor the Hammers will win when they come to blows at the Amex. Chris Hughton’s side have drawn six of their last nine home games this season and are desperately struggling for goals while David Moyes has an extensive injury list still to contend with. Throw in the fact that his side have drawn five of their last ten on the road and this is another on the ticket that could well end in a share of the spoils.

Life under Carlos Carvalhal at Swansea has been incredibly promising so far, though the same could be said of Leicester following the appointment of Claude Puel, with neither manager backed to make quite the impact that they clearly have. Aside from a shock defeat to Palace the Foxes have been strong at home under the Frenchman in particular and in their six meetings with the Welsh outfit in the Midlands – whose wins over Liverpool and Arsenal both came at home – Leicester have won all six.

Just the sort of game you don’t want to be relying on to round up your ticket, I’m covering all bases when Gladbach host RB Leipzig in Saturday’s evening kick-off, essentially reducing my Pick 8 to a Pick 7. The home side are strong on their own patch, while Ralph Hassenhuttl’s men have been poor on the road but Leipzig still have quality players capable of winning any game so I’ve opted to sit back and enjoy this last game, hoping that the seven beforehand come in and waiting to see how much we’ve won!

What is VAR in football? Why do we have it?
Was keeping hold of Mahrez a victory for Leicester?