Every week I will be previewing the weekend Pick 15.

The associated syndicate reference is: 846EYQND

The Christmas cobwebs are out of the way and now we face a new year in which we are sure to triumph! I don’t know if anyone can remember before Christmas through the haze of chocolates and turkey, but last time out went pretty well and was tantalisingly close, falling short but for a couple of goals in our favour. Time to look forward though, into our winning year!

Each week I will be highlighting some fixtures as bankers – games which carry my maximum confidence – and will be tallying up my success rate on these.

Last time I picked only 1 banker: Manchester United and they came through without a struggle, winning 5-1. I actually predicted 5-0 – who would have thought Cardiff would score?

Bankers so far: 20 out of 41 (still beating a random generator – just)

Anyway, onto this week…

It’s FA Cup week – notorious for being highly unpredictable, so we can expect upsets galore! I’m not sure which of these two teams this applies to. If we can expect the full strength Southampton squad to turn up and give it their all – with the “Alpine Klopp’s” tactics – then I would expect the away team to bag this easily enough. But we’re never sure how much the Premier League teams actually want to be in it, and on their day Derby are good enough to take this anyway. So I’m backing Home and Away.

Ipswich are almost a League 1 team already, bar some sort of miracle and Accrington are mid-table, occasional upsetters. I highly suspect that Lambert will want to focus almost entirely on staying alive in the Championship, so the FA Cup might be an unwelcome distraction. But who knows without asking him? And maybe Kayden Jackson will want to give his old team a stuffing just for the fun of it.

Wimbledon are rock bottom in League 1 and Fleetwood, who are 12 points clear of them are playing at home and would love a good run in the FA Cup I’m absolutely sure of it. Fleetwood all day.

Can struggling league 1 side Gillingham overturn the mighty Welsh? No, of course they can’t. Even if a couple of players are rested, this looks a sitter for Cardiff.

Bolton might be struggling to stay afloat in the Championship, but they should have enough to beat League 1 mid-table Walsall at home. However, my spider senses tell me a draw is likely, so I’m going to cover that too.

Scunthorpe are hopelessly difficult to predict, like the Jekyll and Hyde of League 1. I will opt for more reliable Coventry with enough reservations to cover the draw.

I fancy this one for a draw. Both teams are so closely matched you can barely pick them apart.

Sunderland score in practically every match they play, so it’s a bit like they start with a goal advantage. Charlton however, will give them a run for their money. I expect lots of goals and think it could easily go either way, which is what I’m banking on.

I don’t know why I feel so confident in backing Bristol City here, because for all of Huddersfield’s problems in the top division, it’s literally a different league! However, Bristol are churning out performances each week and I expect a decent run from them in the FA Cup – maybe win it at 275/1? Maybe not. 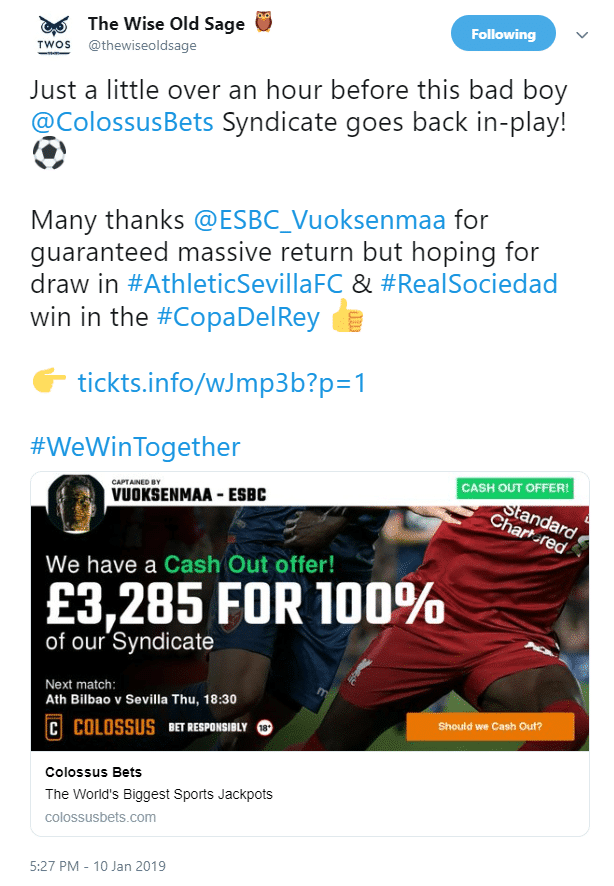 Huesca are masters of losing. They’ve only forgotten how to do it a handful of times this season and I expect them to get right back on track and bring their strongest losing game to this match.

I have looked into the future and feel certain this is a draw. Both teams like to draw far more than they like to win and they’re very closely matched in the stats in wins, draws and goal difference.

Two more teams that are leagues apart. Preston have the ability to turn anyone over in the Championship, and being relatively safe will allow them to really go for this. Doncaster might have one eye on promotion, so I expect a home win.

I predict this will be a scrap with lots of goals, and if it goes that way then you can rely on Leeds to outscore their opponents. They scored twice against Forest even with 10 men. They obviously have a leaky defence which QPR will surely exploit, but Leeds will come back strong from any position as they’ve shown time and time again.

Hull are rank outsiders here, which makes me think that the bookies have not been paying close attention. Did they see them destroy Bolton 6-0? Did they see them beat league leaders Leeds 2-0 before that? I think confidence at Hull is sky high and it won’t do to take the foot off the pedal here and risk ruining it.

Bilbao have only won twice and Celta Vigo are at home. It’s no banker, but the sensible money is on a home win.