Who makes our Christmas football XI?

The festive season is upon us and, as such, it seemed compulsory to put together a cringe-worthy Christmas football XI. Would we pick an entire team from Turkey? Would Frankincense Lampard or Nile Manger make the cut? Read on to find out for yourself.

The Manchester United stopper was once widely regarded as the best keeper in the world, unfortunately it’s all been downhill since then.

Chelsea’s Spanish defender has an absolute wealth of top flight experience but has an unfortunate tendency to freeze in the big games.

This combative centre back will sleigh any opposition attacker he can get his hands on. A sports fanatic, when he’s not playing football he can be found playing stable tennis instead.

A surprise Arsenal representative in our defence, the mobile full back would be a joy to behold dashing through the snow in the winter months. Based on Arsenal’s terrible start to the season, we reckon Bellerin would be laughing all the way to a transfer. 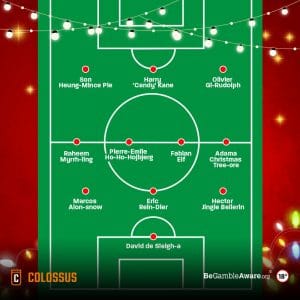 Still only 26-years-old but with over 300 career appearances for club and country, the pacey wideman is already something of a wise man in footballing terms. He provides ammunition for the strikers but, with Aguero out injured, he instead tries to find Jesus.

Despite the commercilisation of Christmas, it really isn’t about presents of possessions. Which is a good for for Hojbjerg as playing for that Grinch Jose Mourinho, possesion tends to be in short supply.

Appearances for the Everton and England star have been in short supply since joining the club, he’s spent half the time injured. Perhaps Everton need to review their elf and safety procedures.

The South Korean has been hungry for goals this season and has gladly sunk his teeth into any chances he’s been given.

His form has been sweet this season and his versatility has been one in the eye for anyone who suggested that he could only be used in a Christmas tree formation.

Not just a fantastic footballer but a wonderful person as well who is always extremely supportive of Red Nose Day.

Are Manchester United in the title race?
Premier League players who had the worst 2020