Tottenham face the acid test as they travel to Spain to take on Champions League holders Real Madrid in matchday 3. Both sides are locked at the top of the group with six points from their opening two games and look well-placed to progress from the group. This should be an open and entertaining encounter and although Tottenham will prove a tough nut to crack, we expect Real to come out and top and maintain their 100 % record.

Manchester City will be aiming to maintain their perfect start in Group F when they welcome Serie A outfit Napoli to the Etihad Stadium.  City have won both their opening games 4-0 and 2-0 respectively and they’ll be seeking to send out a warning to the rest of Europe with another win against Napoli. Both sides are among the most attacking in Europe so goals should be on the menu in Manchester. Napoli are a dangerous opponent for anyone and are currently top of Serie A, but home advantage should be key for City and they should edge out the Italians in a high-scoring affair. 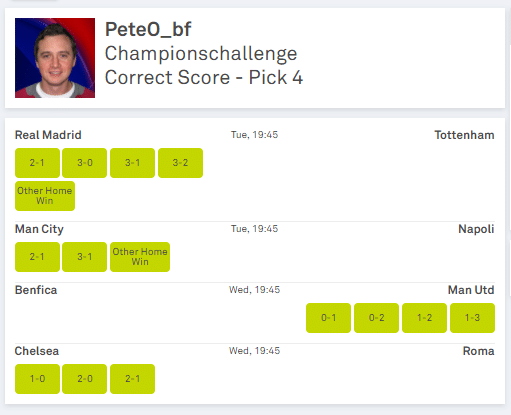 Manchester United travel to Portugal to take on Benfica knowing victory will go a long way to booking their place in the last 16 of the Champions League. Jose Mourinho’s men have won both their opening Group A games, while Benfica sit bottom of the group after two straight defeats. Benfica have conceded seven goals in those two games so United will fancy their chances to going to the Estadio da Luz and picking up all three points.

Chelsea sit proudly at the top of Group C with two wins out of two ahead of the visit of Roma to Stamford Bridge. Chelsea produced one of the best away performances in Europe last time out as they came from behind to beat Atletico Madrid and another win here will put them in a commanding position to reach the last 16. Roma drew at home to Atletico Madrid and struggled to a 2-1 win over Qarabag in their opening two games and a clash with Chelsea should be their toughest test. Despite having injury problems to key players to contend with Chelsea should have too much quality for an inconsistent Roma side.