ADJALI is a horse I expected to be among the top ranks in this division but giving weight away to whole field adds to his task but I wouldn’t still suggest he’s the one to beat. FAKIR D’OUDAIRIES did make a few mistakes in his win but he did it in good style at the end and I think he’s quite versatile in how he can ridden so looks the most likely runner to exploit the weight he receives.

A genuinely wide open Handicap but you’d hope one of the higher rated horses might be able to take this. SPIRITOFTHEGAMES can be forgiven his run at Newbury and he looked a really nice type when winning at Chepstow. A repeat of that effort puts him bang there. KILDISART looks far from the finished article so providing he handles the track you’d expect a bold bid from him. AZZERTI looks a solid all round option with plenty of boxes ticked.

A nice looking handicap with JANIKA a likeable sort who should have more to offer on his second start for the stable. As you’d expect with this race type there are quite a few who look exposed but he should have more to come. THE KINGS WRIT should go well again but I do worry about the ground for him and SIRUH DU LAC will try his best again but he might find this too tough. 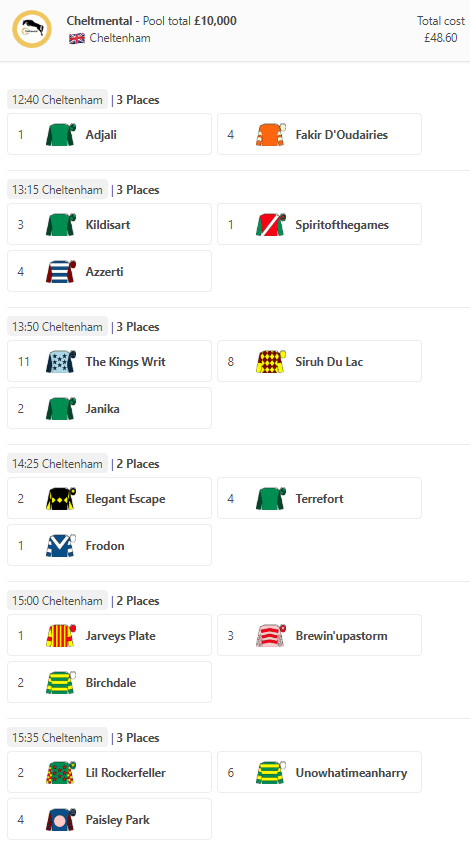 The one horse you can bank on giving it his all round here and in these conditions is FRODON. He’s officially the best horse in the race and this looks a smart opportunity to find out if he really does stay. I have my reservations especially with 3 strong stayers in this field, but I’m not sure ELEGANT ESCAPE is at his best round here. TERREFORT likes it here but would probably prefer slower ground and hasn’t had a straight forward season. Looks a wide-open affair and tricky betting heat.

BIRCHDALE should be involved in the business end of this race but both JARVEY’S PLATE & BREWIN’UPASTORM won’t make things easy for him. With such a small field there’s not a great chance to search for any value in here but I really do think BUSTER VALENTINE is worth keeping a close eye on. This might not be his day, but I think he looks a really nice prospect so I’d expect him to run well in his own right.

Fact finding mission here with those at the head of the market here to answer questions so I put UNOWHATIMEANHARRY into the picture. I think the race will be run at a furious pace, and on these terms I think he’ll be on the premises coming up the hill. He’s not the strongest in a battle which is a concern and the race being run that way would also suit PAISLEY PARK. I can see those two finishing close to each other in any case and LIL ROCKERFELLER will back to his best in this discipline.