All they needed was Chelsea to win by two or more goals (Chelsea -1.5). It was dramatic from start to finish. TPP decided to Cash Out a further 20% at half time for £29,874, and it proved to be a wise move as Chelsea ended up winning by only the one goal.

Read on to relive the drama…

TwoPoundPunt has built quite the Colossus Syndicates following! His £1,024 Syndicate to tackle the £250,000 Asian Handicap Pick 20 pool included players from Colossus Bets, Betfair, Tote Ireland, MerryBet and more. Together, they entered the pool and had their eyes on the jackpot!

After a partial Cash Out of £8.6k on Sunday night, the Syndicate headed into the final leg of the pool and were going for £200,000. Players all over twitter were sending in their best wishes to TPP in his challenge, including this message from The Racing Blogger.

John Terry sent the Syndicate into delight with the first goal of the game on the 22nd minute. 1-0 Chelsea.

But only 2 minutes later Terry turned provider, as calamitous defending played in Etienne Capoue to equalise for Watford. 1-1 and the Syndicate was back to square one.

Twelve minutes later, Cesar Azpilicueta restored Chelsea’s lead with a driven shot into the far corner. The Syndicate were on the brink of £200k!

Half time came and the score was 2-1 Chelsea. Not quite enough yet for Chelsea -1.5, but Chelsea to win by two or more clear goals was looking strong. There was only one question on the lips of players, “what’s the Cash Out offer?” Colossus Bets did not disappoint, with a staggering £119,497 Cash Out offer.

Players took to twitter to respond to the Cash Out offer. With several calling for a Cash Out, the Captain Cashed Out another 20% for £29,874! The Syndicate had now banked £38k and were playing for £150,000.

Shortly after half time, Chelsea made it 4-2 and sent TPP’s Syndicate on the path to winner’s corner. The selection was now WINNING and they could taste the £150,000! 3-1 Chelsea.

But yet again, Watford responded just two minutes later to reduce the deficit to one goal. Daryl Janmaat the villain for the Syndicate this time. 3-2 Chelsea.

Stefano Okaka equalised for Watford in the 74th minute. 3-3 with 16 minutes to go and two Chelsea goals needed.

But hope returned when Cesc Fabregas put Chelsea back ahead in the 88th minute! One Chelsea goal needed for £150,000! 4-3 Chelsea.

As the additional time board went up, there were to be a minimum of FIVE MINUTES added time. Watford swiftly went down to ten men with Prodl seeing a second yellow.

The newly crowned Premier League Champions now had several minutes to score one more goal against the ten men of Watford. Could they do it?

Time just got away from TPP’s Syndicate as Chelsea could not find that crucial goal. The match ended 4-3 with the Syndicate scooping consolation prizes to take their total return to £44,433. 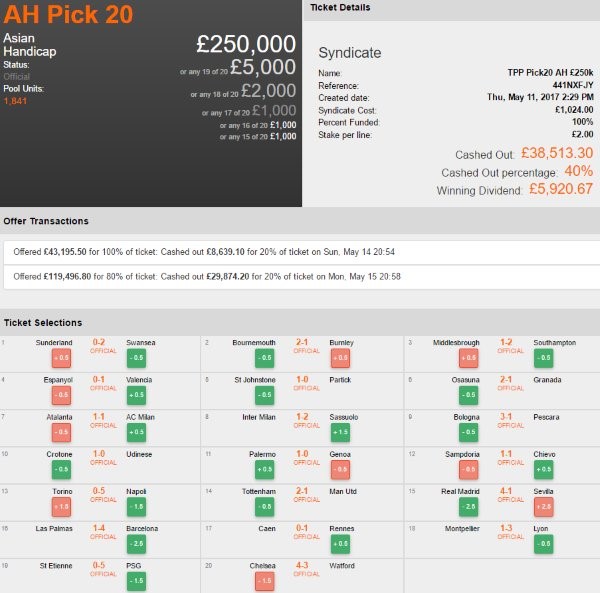 Syndicate contributors were rewarded with a return of over 43 times their stake!

TwoPoundPunt has vowed to return and tackle the Pick 20 Asian Handicap again, having Syndicates come close on multiple occasions. 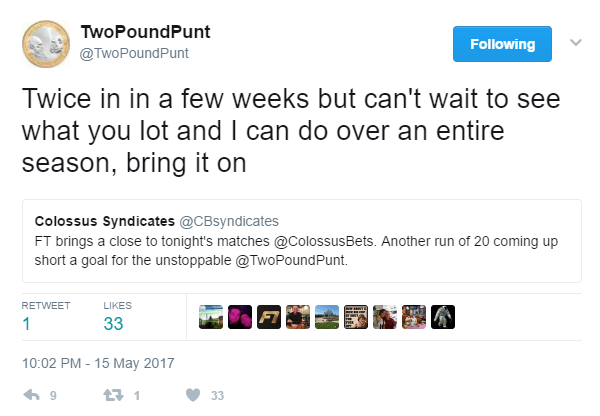 Much to the delight of his adoring public. 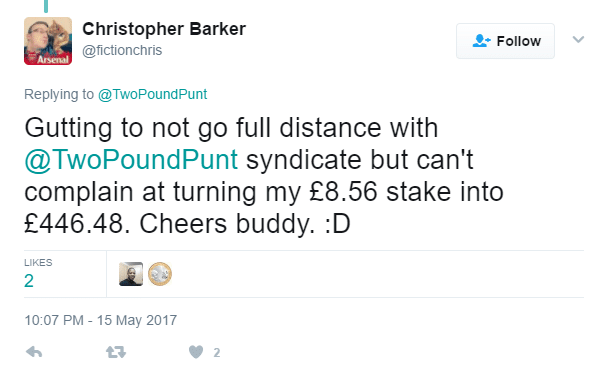 You can follow TwoPoundPunt on twitter to keep up to date with all of the latest from his Syndicates.